"Your Royal Highness, my name is Run. I have a gift for you, please push the 'open' button to receive your present." That's the human-like voice of a robot... waist-high, cylindrical, mobile, wearing a bow tie and gentlemanly... instructing Prince Andrew, the Duke of York, on his recent visit to China.

The robot gifted a notebook with an embroidered cover to the prince, who appeared pleased with both the gift and his new Chinese "friend", who, avoiding the crowds and obstacles, guided him through the hall to the exhibition stand from the exit.

Designed by Yunji Technology, a Chinese startup, Run is the latest version of robots that have been impressing VIPs of late. Pitt, Run's predecessor, had "interacted" closely with Premier Li Keqiang and then became an online celebrity. 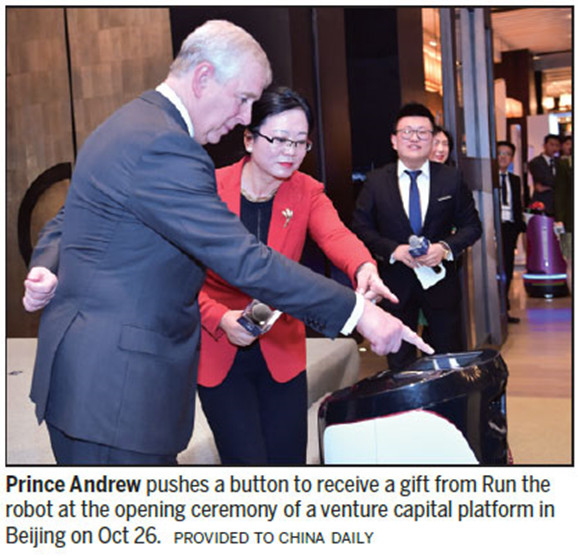 Yunji has multiple patents in artificial intelligence in China. The company focuses on the development and commercialization of autonomous robots, especially for delivering goods.

Zhi Tao, co-founder and CEO of Yunji, said he believes the key is to make every robot move freely.

"In order to bring robots to the masses, it is important to make them move easily. Once it is not fixed to one physical location, just like human, its ability will be enhanced and then it can serve us better.

"We are committed to making the robots move easily within 1 kilometer for use in both indoor and outdoor scenarios, including hotels, office buildings, shopping malls, hospitals, communities and so forth." 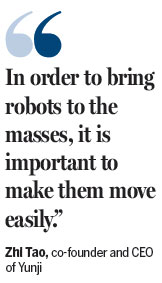 Equipped with advanced positioning system, the bellboy robots can automatically identify and avoid obstacles and people. Once a robot becomes part of the internet of things, it can communicate with elevators, move up and down the hotel floors, arrive at the door, notify guests of telephone calls, deliver items they need, such as food, water and towels.

It is expected such robots will be materialize by the end of this year or at the beginning of next year, and become operational in the middle of 2017.

"It is a huge industry," Zhi said. "The Chinese commercial-use robotics market will reach tens of billions of yuan by 2018."

He said thanks to strong policy support, there will be more new robots to meet people's daily needs.

In the past, Yunji received funding from iFlytek Co Ltd, a Chinese company dedicated to intelligent speech and language technologies.